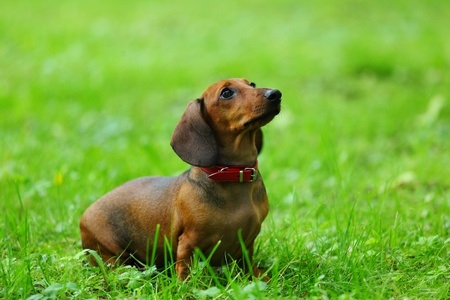 Ever wonder how the dachshund dog ended up with its unique shape and name?

Patti’s Dachshund Farm is going to walk you through a brief history of our favorite dog breed of all time.

The dachshund as we know it today originated in Germany, in the 17th century according to The Spruce, though there are signs of the dachshund’s ancestors in drawings and literature as early as the 15th century. In the 17th century, the dachshund was bred to hunt badgers, so their German ancestors gave them the name “badger-dogs” in German: dachshund. The breed eventually split into two sizes, one slightly larger and one the size that we are familiar with today. The larger dachshunds hunted badgers and wild boar, and the small ones hunted hare and foxes.

Dachshunds were bred to have their unique shape and size so that they could burrow through small spaces during the hunt that their human counterparts couldn’t enter—that’s what made them such good hunters. Plus, their long snouts gave them a keen sense of smell, and their short legs were good for digging and burrowing.

The first dachshund was brought to the USA around 1885. In the same year, The American Kennel Club recognized the breed officially.

Since then, dachshunds have become more well-known for their intelligence, ease of training, good temperament, and spunk—which is what makes them such a great family pet—rather than their hunting skills.

So, if you’ve ever noticed your dachshund chasing a rabbit around the backyard, know that it’s in his genes! We may not want them to hunt the neighborhood rabbits anymore, but back in the day it was their job.

Learn about the new dachshund puppies available here at Patti’s, and call us today at 334-385-2600 if you have any questions about our pups.