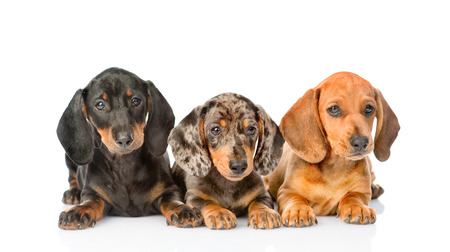 Many people simply describe their dachshunds as brown, red, gold, etc. But in reality, the colors and patterns of the dachshund breed are much more complicated.

What distinguishes a pattern from a solid color is that patterns are specific markings on top of the solid color. There are five main dachshund patterns:

The difference between a dapple and a double dapple is that the light patches on a double dapple are larger than that of a dapple. So if that same black and tan dachshund was instead a double dapple, they could have a large patch of white across their body, in addition to smaller patches interspersed throughout.

A brindle dachshund has dark stripes superimposed over their solid color. The stripes can be difficult to see depending on the solid color of the dachshund.

Piebald is similar to dapple as it consists of white spots superimposed onto a dachshund’s solid color. However, unlike in dapples, there is no variation in color of the spots like there can be in dapples.

Sable dachshunds often look black or black and tan from a distance, but in reality, they have red roots with black tips across the whole body, with the exception of the face and feet which are typically red.

Still have questions about the different colors and patterns of the dachshund breed? Then feel free to give Patti’s Dachshund Farm a call at 334-385-2600. We can answer any further questions you may have, and even direct you towards some of our lovable pups that are still looking for their forever home.