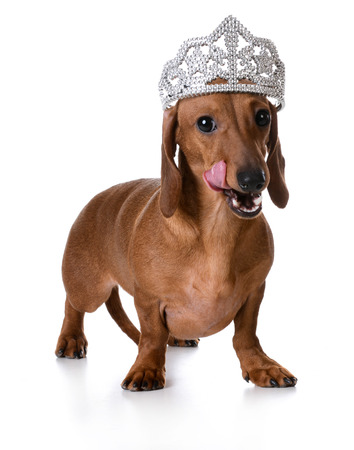 Dachshunds are one of the most popular and easily recognized dog breeds on the planet. Not only do dachshunds hold a special place in our hearts, but their popularity was gained largely due to their special place in pop culture. Here’s a look at how the dachshund puppy breed has been prominent throughout the years in popular culture.

According to History and Headlines, dachshunds have been the go-to breed of dog for the well-to-do woman for almost 100 years. Liliane Kaufmann, who ran in Frank Lloyd Wright’s social circle back in the 1930s, bred, owned and raised dachshunds, and showed them each year.

Jean Harlow, a famous actress in 1930s Hollywood, had a dachshund named Nosey. Doris Day, Joan Crawford, and Elizabeth Taylor are just a few of the other famous women in our pop culture hall of fame who owned a dachshund or two over the years.

It’s not just the ladies of Hollywood who fell in love with dachshunds; Queen Victoria of England had so many dachshunds throughout the years, that some credit her with the breed’s prominence in Great Britain.

Did you know that Andy Warhol had two dachshunds named Amos and Archie? According to art history, the groundbreaking artist brought his dachshunds with him everywhere, from dinners out on the town to art shows at Warhol’s studio.

We see dachshunds in movies, on the cover of magazines, and in the laps of Hollywood starlets every day of the year; there’s no denying it, the dachshund trend is here to stay.