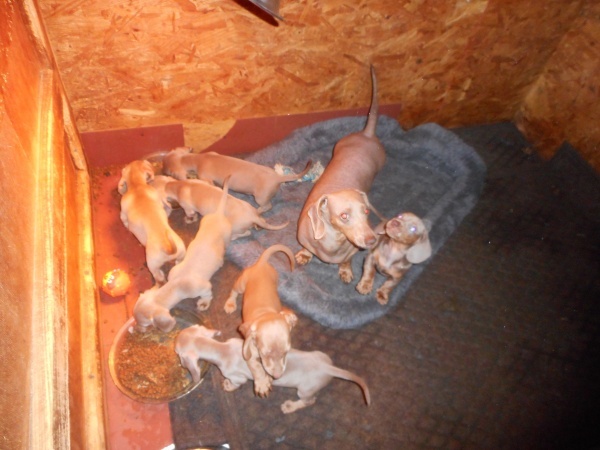 The dachshund name has a German origin meaning “badger dog”. Until today in modern German, the dachshund is most commonly called dackel, and teckel by hunters. In the U.S., due to their long body and short stature, the dachshund is referred to a wiener dog or sausage dog.

There are two sizes to the dachshund, the standard size, and the miniature. Both types of dachshund were developed to use their scent and chasing ability to hunt animals. The standard dachshund was intended for hunting badgers and other burrow-dwelling animals. The miniature was bred to hunt smaller prey like rabbits and prairie dogs.

While still used for their hunting capability, today dachshunds are commonly bred to take part in conformation shows as well as to become family pets. According to the AKC, the dachshund is the 11th most common dog breed.

Best known for their spunky personality, the dachshund is also of high intelligence and gets bored easily. From the intent of their breeding, dachshunds are active and have a consistent need to be challenged.

If you’re interested in owning a dachshund, we are a quality and caring dachshund breeder. At Patti’s Dachshund Farm, we take great pride in breeding beautiful and healthy dachshund puppies. You can view available litters right on our website, or you can contact us for extra information.