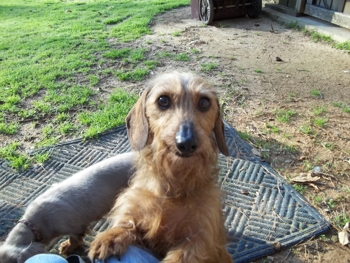 Most people are familiar with what Dachshund’s – or “wiener dogs”, as many people refer to them – look like. But those interested in adding a Dachshund to the family might yearn to know more about the temperament and personality of this unique looking breed. The complex answer will certainly unravel as new owners fall in love with their quirky, playful dachshund pup.

The dachshund is a clever dog that was originally bred for hunting. In fact, its name translates to “badger dog” in German. Dachshunds are curious dogs that naturally crave exploration, entertainment and exercise. On the other hand, if they don’t receive the attention and activity they crave, dachshunds can become bored. Because they were bred to hunt independently, dachshunds can be a bit stubborn at times. However, most owners come to adore this amusing trait of the breed, and with the right training can overcome the dachshund’s peculiar attitude of reluctance.

Dachshunds are known to be devoted and loyal to their owners. They are physically affectionate animals, often eager to snuggle with a willing human counterpart. This loyalty can sometimes cause them to be skeptical and standoffish around other people and their dogs, with the exception of other dachshunds, with whom they usually get along swimmingly. In the company of other animals, dachshunds don’t seem to realize their small size, displaying an almost comical level of pride and bravery when confronting larger dogs. Like most dogs, dachshunds don’t like to be teased or annoyed by young children, but can get along well with those who know how to act around them. Dachshunds are great with children if they grow up around them.

On that note, dachshunds love to be a playful companion to their human friends. Depending on the specific dog, they may enjoy a game of fetch. They certainly love to chase small animals. In fact, as natural hunters, dachshunds are known to dig and burrow any chance they get, often in blankets or piles of laundry. Their hunting roots also give dachshunds an insatiable appetite, so be sure to limit the amount of treats and table scraps you give them.

Like all dogs, dachshunds have strong character traits that make them who they are. You will surely come to adore and cherish their trademark playfulness and stubbornness all the same. Spend some time with the pups at Patti’s Dachshund Farm and we’re willing to bet you won’t even consider choosing any other breed.