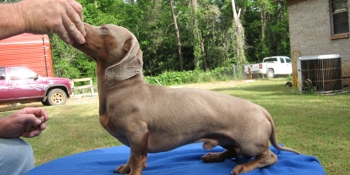 Do you think dachshunds do a double take when the Oscar Mayer Wienermobile drives by, thinking for a brief moment that it might be a gargantuan member of their breed? If they haven’t noticed their likeness to the shape of a hot dog, us humans certainly have. We adore dachshunds for their unique look, finding joy in their goofy trot and propensity to dig their long bodies into piles of laundry.

How did such a pet come to exist? Why were dachshunds bred over time to look the way they do, and how was it done? To find the answer, we look to Germany, hundreds of years ago. Like most dogs, dachshunds were bred for hunting. It’s believed that dwarf mutations of other dogs, like bloodhounds, were used to develop the distinct body of the dachshund. By the 1700s, dachshunds, or according to their actual English translation, “badger dogs”, had taken on the short, stubby legs that they’re known for. They were released in packs to find and enter badger dens, chasing out and cornering their prey for the German hunters.

Apparently, the German hunters saw further potential in the odd shape of their trusty partners. They selectively bred the dogs to be even smaller, and the miniature dachshund was born. It was able to fit into smaller holes to be more useful in the hunting of other animals, especially rabbits. While Americans tend to keep the dachshund breed separated into only two categories, standard and miniature, the Germans had three, more useful for the selection of a specific dog for hunting. Like us, they had the standard dachshund, but divided the miniature into two types, the rabbit dachshund and dwarf dachshund, based on the size of the hole the dog could enter.

Of course, we all know how that long body and curious personality makes for such a lovable and goofy pet. Dachshund’s became one of the most popular dogs in the United States. Sadly, World War II and negative feelings toward Germany caused the dachshund to fall out of favor with Americans for a short time. Before long, however, the delightful “wiener dog” was back to being the object of affection (and the butt of jokes) for all.

See how the history of the dachshund makes it one of the most interesting, friendly, and funny breeds of dogs, growing into such a popular pet for so many happy, loving owners. Pay Patti’s Dachshund Farm a visit and meet our adorable dachshunds today.